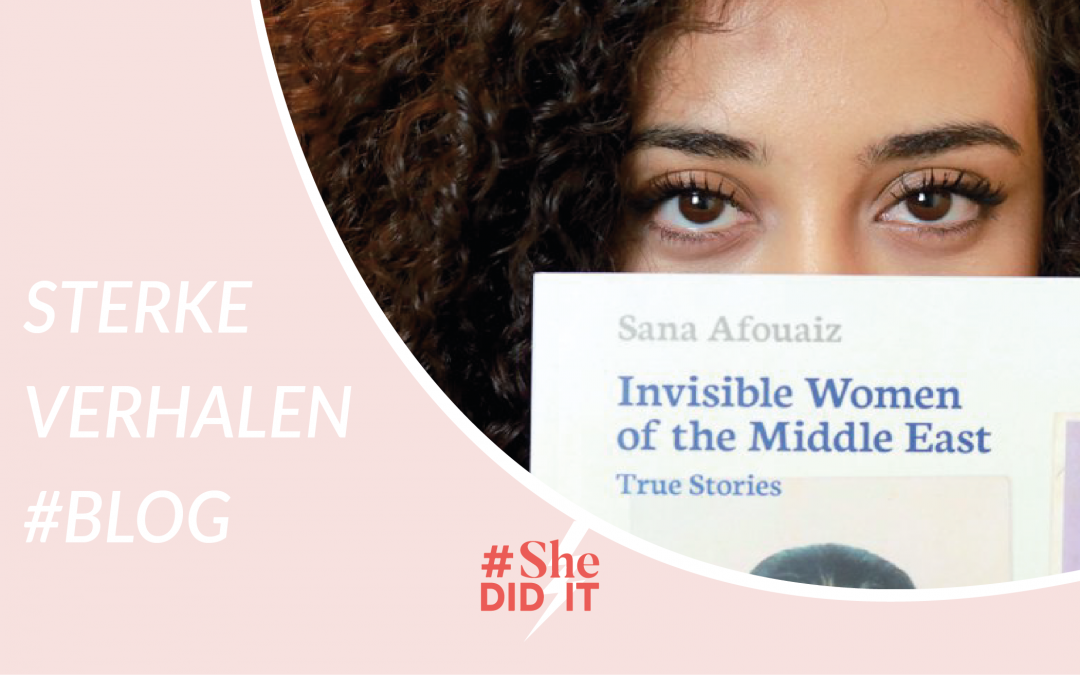 (Getuigenis) We all have a story to tell which shapes us to be the person we are today. A lesson we learned, to be shared with the world. Sana Afouaiz did just that in her book ‘Invisible Women of the Middle east’. In this blogpost she touches upon the history of it.

As a young woman, I was left by my mythical stork at my parents’ doorstep in Agadir.

The faces I grew up with were mainly the faces of women and girls.  I have learnt my stories from them.  The so-called male species did show-up occasionally, but were always in a hurry, displaying meanwhile visible intense demeanour tinged with cockerel like appearance. Domination and the inalienable sense of superiority was a role assumed by men, whereas women were told and subsequently accepted that their role consisted of submission and being inferior.

That is a crude but sadly accurate description of the social milieu I grew up in. For no explicable reason at the time, I, at a very young age, rebelled against the readily accepted male-female relation social model, with occasional unpleasant ramifications.  But I persisted.

What shocked me most as I travelled through the MENA (Middle Eastern and North African) region was that the circus I described above was not, as I thought then, unique to my hometown; it was in fact duplicated in most parts of the region.

There were variations, but they concerned mostly appearances.  The underlying substances in most cases shared similar ideas and the same beliefs and closely connected histories.  What has emerged as a result are deeply rooted convictions, ubiquitous but pathological realities, with few questions asked.

As result of this journey, I wrote a book “Invisible Women of the Middle East” which tells the stories of these women and how oppression is not the same for all women — there is not one common thread that tie women together, but a whole patchwork of experiences.

For long, I have believed that the first essential step towards an effective therapy is an informed, honest, ideologically-free diagnosis of what went wrong with humankind as far as gender issues are concerned.  And I have looked at this question mainly through the polarising prism of the MENA region.

“Yousra continued, “To me, it felt like the biggest betrayal and deceit by those I loved the most. But, I still remember the pain much better. Few minutes after I was let off by the women sitting on me, I got up and walked out sobbing. My dress — stained with blood — made me feel sick. In the yard, I sat on a plastic chair, swatting away my mother’s efforts to placate me with a sweet cup of tea and a home made piece of bread, as if that would help. Again, I asked my mother, ‘Why did you do this to me?’

Sana is an award-winning, gender expert, women advocate, and public speaker on feminism and women issues. She is author of “Invisible Women of the Middle East”.

In 2015, she established Womenpreneur, a network that supports more than 500 female entrepreneurs every year to grow their initiatives, leadership & their social impact. She is the co-founder of Womenquake, a global movement, that revisits and critically examines the beliefs, myths and ideas about gender. Check more at: www.sanaafouaiz.com

In need to share your story? Write it down, reread it and convince yourself that you made a difference. That you inspired someone. And send it to us at hello@shedidit.be so we can help you inspire others.